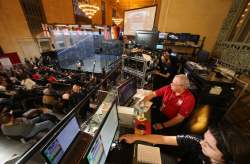 Over the last decade professional squash has gone through several changes in an attempt to promote the game across the globe and increase viewership among spectators. A major component of this endeavor has been the development of SquashTV, which provides high-quality streaming video coverage for professional squash. The channel provides access to match analysis, live streams, exclusive interviews, highlights of tournaments and much more. In this blog we investigate the popularity of SquashTV on YouTube. Perhaps this is a good method to analyze the increase in popularity of squash among the general public rather than among the aficionados who subscribe to SquashTV. Roughly a year ago (in January 2019), SquashTV reached a considerable milestone by surpassing 100 million views on YouTube totalling 9,700,00 hours (11,106 years) of squash. The following blog contains some statistical analysis of how SquashTV grew on YouTube from March 2017 to January 2020. For further reading on SquashTV there are linked articles at the end of this blog.

Subscribers, Videos, and Views as a Function of Time

To facilitate presentation and illustration, from this point on we will only consider data within a 12 month period of time. This time interval will be September 2018 to August 2019 inclusive thus including the entire 2018 – 2019 season.

New Subscribers, Videos, and Views per Day Over a Single Season

This aforementioned season is depicted in the graphs below, where each individual spike represents a single day and its amplitudes represent the number of new subscribers, videos posts and number of views for that given day. Superimposed on each graph is a smoothed red line (smoothed using moving averages technique, where every data point is averaged over the previous three days) in order to make the data trend a little more clear. In each graph one can see that there are time-consistent spikes which are numbered. These numbers can be cross referenced with the table below the graphs where information regarding which tournament was being played at the time can be viewed in addition to which genders play in this tournament. The other data in this table will be explained later in this section. All the peak numbers are shown in the subscribers graph but some of the numbers are purposefully missing in the other graphs (i.e. videos and views) for aesthetic reasons. From all these graphs one can deduce which peaks in the graph correspond to which tournaments.

Upon close inspection of the number of videos posted, one can also see that there are some negative values. This is possibly due to some videos being removed. For analysis on this section these negative values are ignored. It can be seen that there is a slow start to the season with a low viewership in the Oracle NetSuite Open (#1). Perhaps this is due to lack of awareness of fans that the season has commenced. Clearly there are peaks in the number of videos posted for most tournaments resulting in peaks in both the subscribers and videos viewed charts. There is a decrease in the number of new subscribers and video views in the time period between the tournaments and during the off season due to fewer tournament videos being posted. Having said that, the aforementioned parameters remain at the considerable level of about 45k views per day and 55 subscribers per day in the off-season during the tournament intervals. This may well be due to the additional content posed by SquashTV, such as shot of the month, tournament summaries, player interview etc.

The above plots show how the parameters vary on a day-to-day basis. The above table (left hand side) provides us with the dates of each tournament. Thus by combining these pieces of information we can determine the number of subscribers, video views and video posts that occurred during the time period of  each tournament. The resulting information is shown in the above table under the ‘Tournament Totals’ columns and is illustrated in the bar charts below whereby the number on the x-axis can be used to reference a specific tournament on the above table. From the graphs it can be seen that the Tournament of Champions (#8) and PSA World Championship (#9) drew the greatest number of new subscribers with approximately 1,000 each for the entire tournament. These two tournaments also received a high number of views with only the ‘El Gouna International Open’ (#13) getting more views. However, the ‘El Gouna International Squash Open’ (#13) also had the most videos posted (29) so it is not all too surprising that it too has the most number of views. To normalise the effect of having a large number of videos posted, we can instead look at the number of subscribers and video views of a tournament as a function of the videos posted. This data is also presented in the above table under the section entitled ‘Totals per Video Posted’. Surprisingly it is the Grasshopper Cup (#11) that substantially outperforms the other tournaments in terms of subscribers and video views per video posted. This seems to be due to a low number of videos posted and yet it maintains a good viewership and subscription rate. It should be noted that there was also a ‘Womens Exhibition Event’ at the Grasshopper cup which received a lot of new subscribers and video views. Of course these results are a crude approximation due to the fact that other videos may have been posted during this time, other tournaments may be simultaneously taking place with video posts, but we have tried to mitigate such errors as much as possible.

The Distribution of Subscribers, Videos, and Views per Day

From the graph describing the number of videos posted per day we can conclude that on ~33% of the days no videos are posted and another 31% of the days one video is posted. As one continues to increase the number of videos the percentage of days decreases substantially. One can again see that there are some negative values, which we have already noted above to be due to some videos being removed.

An interesting note on the distribution involving the number of views below is that there is a noticeable discrepancy between the gamma distribution (cyan line) and the data (orange bars) in the 0k – 25k range. This effect can also be seen in the above section (graph of number of viewers per day) where the level of viewership rarely decreases below 30k new views per day, even in the off season. Essentially this means that for almost all days, there are over 25k views. Therefore one expects to have a lower percentage of data in this range of the distribution curve.

The above plot shows the distribution of subscribers, videos, and views over the 1 year time period previously defined. However, we can also divide this data into two distinct categories:

By dividing the data into these two categories we can determine the specific behavior, or more precisely the difference in behaviour, of subscribers and viewers on TD compared to NTD’s. Some basic statistical analysis reveals that 63% of the days are NTD’s (229 days of the year) and 37% of the days are TD’s (136 days of the year). The plots below are similar to the distribution plots above except that here that data is split into the two aforementioned categories. Each plot is annotated and colour coded to indicate which plots (TD or NTD) represent which dataset. On the bottom right there is also a table which provides essential statistical analysis on both sets of data. In each case of the subplots the lighter colour shade represents the non-tournament days (NTD) while the darker colour represents data from the tournament days (TD). The x-axis gives the magnitude of the parameter and y-axis provides the percentage of the total data in which this magnitude occurred.

In all graphs one can see that the TD plots are always shifted to the right. This is also reflected in the table where the mean, mode and median are all higher for the TD plots. If we look specifically at the mode values, which is where the peak occurs, we can see that the NTD’s has 49 subscribers per day, 0.5 videos posted per day and 38k new videos views per day. This is in direct contrast to TD which has (in terms of mode values) 71 subscribers per day, 1.2 videos posted, and 61k views per day. This essentially reinforced what we expect, that the TD’s have higher values of subscribers, videos posts and video views.

One can also see that there is a consistent difference in amplitude which is due to the percentage of the full data represented by the that category (i.e. TD = 37% and NTD = 73%). In fact the summation of both data sets per binning interval will give you the total distribution as is shown in the previous section. Similar comparisons can be made with the mean and median parameters on the table.

The accuracy of the above graphs is not clear as the TDs only take into account the PSA World Tour tournaments. It does not take into account tournaments such as Junior Championships and World Team Squash Championships, which are often live streamed and receive a high viewership. Having said that, all the major spikes in subscribers and viewers graphs when depicting the daily parameters have been accounted for by PSA World Tour tournaments.

New Subscribers, Videos, and Views as a Function of Days of the Week

The below graph investigates whether the number of subscribers, video posts, and views vary depending on the day of the week. This data is representative of the 2018 – 2019 season as is previously defined. One can clearly see that the number of videos posted on Sundays is much less than the other days. On average 8% of the videos are posted on a Sunday whereas, on average, 13% of the videos are posted each of the days in the rest of the week. This effect is not observed in the viewership or the number of new subscribers. In fact there is no discernible trend regarding viewership and subscribers indicating that the YouTube channel has no day preference for these parameters which average at approximately 14 % per day.

New Subscribers, Videos, and Views as a Function of Months of the Year

The below graphs explore the parameters as a function of months of the year. The data is again split into the parameter during the TDs and NTDs. This split in data is indicated in each graph with the aid of a colour code which is illustrated in the legend. In general the darker colour is for the TDs and the lighter is for the NTDs. The variation between the TDs and the NTDs for all parameters can be clearly seen. October, January, March and April see the largest parameters, and one can also see that during these months there is a large proportion of these parameters from tournament days. For the off-season, which we define as July and August, one can see that there are no tournament day parameters (darker colour) but rather the bar is full of NTD’s (lighter colour).

Article in  a Nutshell

Other Articles on SquashTV